Home » internet » webdesign » what-is » About What is VOIP

About What is VOIP

WHAT is VOIP and details about VoIP is mentioned below:

What is VOIP
VOIP stand for Voice over Internet protocol. VoIP is a general term for a family of transmission technologies for delivery of voice communications over IP networks such as the Internet or other packet-switched networks. At a very basic level it is the idea of using a data network to transfer voice between two points. Although voip has become a buzz word in recent years has it origins as far back as the early 1970s.

VoIP provides cost savings over traditional land-line phone long distance and cell phone long distance charges. VoIP can also be used for voice mail and fax mail applications, reducing the need to print documents or have access to email applications. In simple, when we talk about what is Voip can be described as- Voice over Internet Protocol(VOIP), is a method for taking analog audio signals, like the kind you hear when you talk on the phone, and turning them into digital data that can be transmitted over the Internet.

People using VoIP can call any telephone anywhere in the world and can receive calls on telephone sets connected to the Internet or Local Area Network (LAN).

Some background history:
Although VoIP has been creating quite a stir in the press recently, it’s actually not a new idea at all. The history of Voip extends further back into the world of pre internet that most people would think. The first Voip calls where made as far back as 1973. 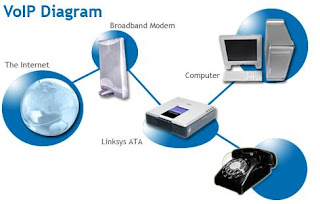 VoIP was originally developed to provide voice communication between computer users in different locations. Although it still has this application, it has been further developed into a telephone network in its own right.

1995 — VocalTec releases the first commercial Internet phone software
The first publicly available internet phone software from Vocaltec was the catalyst for the explosion about VOIP use. The Vocaltec software was able to run on a home PC and utilized much of the same hardware products that Voip services use today in terms of soundcards, speakers and headsets.

Once Vocaltec had laid the foundations, other companies began to develop software for the VOIP market and also hardware in the terms of hard phone and network switches. The expansion of broadband also aided the growth of VOIP by increasing the quality of calls and reducing the latency issues that effected VOIP at the beginning. By the year 2000 VOIP calls in the US where about 3% of the total.

The popularity of VOIP has increased since the turn of the millennium and with free VOIP provider Skype currently having registered a staggering 400 million user accounts at the end of 2008.

About VOIP -Today
There are currently many VoIP services available for residential and commercial use. Some of these still rely on PC-to-PC connections but may offer other services such as PC-to-phone and phone-to-phone. With the growing availability of VOIP services for mobile phones it looks as if the adoption of VOIP will continue to expand rapidly.

Internet phones are available that plug into the sound card or USB port of a computer. These phones may have number pads and ringers that allow you to use them the same as traditional telephones.

About VoIP Importance
VoIP is important because, for the first time in more than 100 years, there is an opportunity to bring Voip about significant change in the way that people communicate. In addition to being able to use the telephones we have today to communicate in real-time, we also have the possibility of using pure IP-based phones, including desktop and wireless phones. We also have the ability to use videophones, much like those seen in science fiction movies.

One of the more interesting aspects about VoIP is that we also have the ability to integrate a stand-alone telephone or videophone with the personal computer. The benefit for both home and corporate customers is that they now have the opportunity to choose from a much larger selection of service providers to provide voice and video communication services.

VoIP enables people to communicate in more ways and with more choices.